Few things highlight absolute absurdity than autism.  Nothing is at times more maddening than autism. And neither of those have anything to do with the child who has the autism.  It's the systems you have to fight.  Society. Insurance. Schools. Agencies. Government. Doctors.

The very system designed to serve the child who is diagnosed with autism is doomed from the beginning in that there's up to an eight year wait to even get the help your child needs if you can't afford it or don't have insurance!  How mad is it to make a child wait for eight years to get services that to their future independence, are life and death?  Would anyone make a child with a broken arm wait eight years to get it set?  No.  But we as a society do make a child with autism wait that long to get early intervention.  Early intervention that does make or break a child's future ability to live independently or not.  Maddening I tell you!

How maddening do you think it is to know that if you have insurance, but need something covered that will help your child with autism, that because your child has autism it isn't covered?  But that if you would say that your child is hyper or has diabetes, any drug imaginable in any amount, would be covered instantly and without question!

There are so very many maddening aspects of autism -- listing a few of them here will not even do justice, and what's most maddening of all, is that it doesn't need to be that way.

We have agencies designed to help a family, and most often it's me getting a call from the agency about how to help a family.  If they want actual help that is, not just a stack of paperwork to fill out repeatedly and not get any help from doing so.

We have medical centers designed with state-of-the-art equipment and the most highly educated physicians, yet I'm getting calls from those centers on how to actually help the parents with the "alternative treatments" like diets, supplements, etc.

We have schools that are mandated by the government to leave no child behind, but yet because we have allowed them to put more focus on sports and stadium's, our "special education" students are indeed left behind.  Way behind.

Do you know how maddening it was for me to see fifty buses of football players, band members, cheerleaders, drill team, and whatever and whoever -- being bused not even a mile away for a football game, while my own son was secluded in a classroom being "taught" by a teacher who the school couldn't even afford to send to a workshop on autism to learn how to properly teach my son?

It's not the child who has autism that is stressful 99.9% of the time.  It's all the madness that surrounds it that a parent must endure, advocate for, fight for.

It's maddening that we have to teach the people who get paid to teach our children.

It's maddening that we are doing the "Case Management" for our child that the state is getting a portion of their pathetic funding to manage.

It's maddening to live thirty minutes from three major medical centers in Houston, but yet I must drive my son two hours away to Austin to get help from a GI Specialist from New York.

It's maddening that my insurance will pay for any psychotropic drug that has not been tested on children and that has more negative side effects than the actual problem you might take it for, but will not pay a dime for an all natural treatment that has no side effects and that is proven to work!

And churches -- do you not know how maddening it is for me to hear of yet another story of a parent asked to not bring their child back because they were too loud, too disruptive, that having a disability ministry is too expensive?  Which do you think is more maddening to God, -- a child of God moved by the Holy Spirit and singing too loud and too off key, or a quietly complacent church member not moved at all who is merely warming a pew?

What's most maddening is that no one seems to see the problem with that!

No one sees the obvious flaw in the vaccination program.  The obvious conflicts of interest.  The obvious epidemic of autism it has caused for an entire generation.

No one sees that if you spend a bit more taxpayer money on early intervention now, it will save a whole lot of taxpayer money later in caring for them the rest of their lives.

No one sees that parents want community services in the home and not a death sentence of institutional life.

No one sees that all of God's children are precious in his sight, not just the "typical" ones.

So yes, when you see a family like mine that lives with autism and see how exceptionally we are living our lives and think that it's not so bad, -- know that there is a high cost to that.  It is a daily maddening struggle to get each little thing.  To achieve each victory no matter how big or small.

Trying to navigate autism is at times a maddening, tedious black hole where the only light comes from others who have walked before us.  Who have taken the time to share, to shepherd, to support.

Some days when I've been on the phone for hours and have still accomplished nothing, I have to think of the Mad Hatter in Alice in Wonderland and that quote I love so very much...

Mad Hatter:  Have I gone mad?
Alice:  I'm afraid so. You're entirely bonkers. But I'll tell you a secret. All the best people are.

That quote is so true. All of the best people I know have gone entirely bonkers from autism.  But you know what?  It's a good kind of bonkers because you will never find a better class of character and all things that are good -- than from parents of children who have autism.  They have dug deeper than they've ever thought they would ever have to dig.  They have traveled further than they ever thought they would have to travel.   They have had to endure triple what a normal person would ever have to endure.

That is the only balance in the madness.

This madness that on days when I'm bored (that was a joke) I call medicaid to try and figure out who came up with the ratio of 300 pull-ups per month but only 96 individual wipes.  Especially again, for my son who has leaky gut.

Not a huge deal, but it just further illustrates the madness we go through in how everyone decides what we need and how we need it, except for those who actually need it.

The madness in how the government and pharma brainwashes everyone into thinking that everything except what actually causes autism, causes autism.

Which brings me to the end of this madness and my favorite e-card: 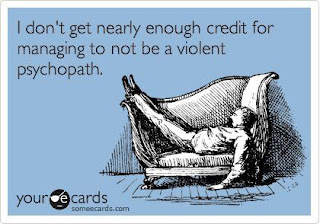